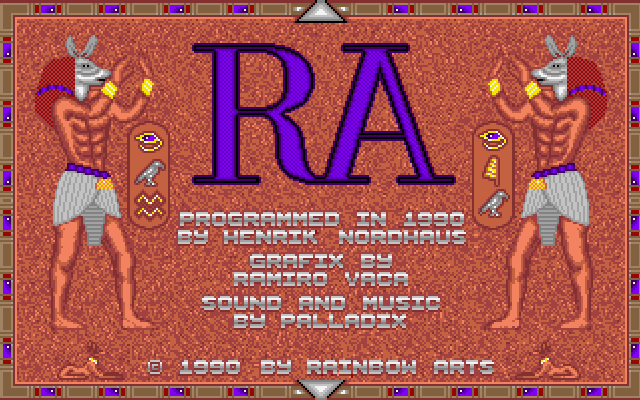 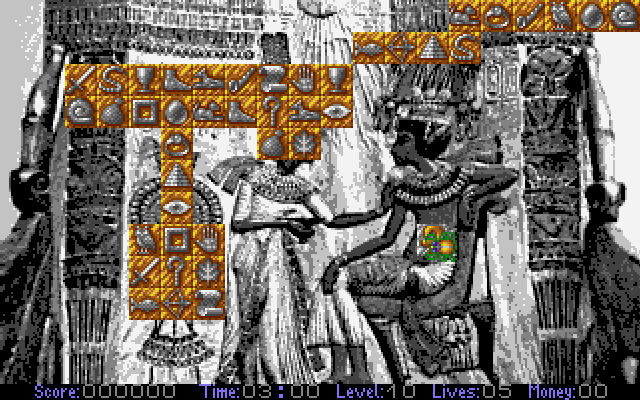 The Curse of RA is a puzzle game where the player (Scarab) has to escape a pyramid by solving the riddles. The player needs to remove all stones on a board by finding a counterpart. Only two stones with the same symbol can be removed at a time and they have to be on a straight line, horizontally or vertically. The game starts with Scarab on an ankh and that item has to be returned upon completion. Moving a stone is done by sitting on one and moving it towards the counterpart. Not all stones can be moved however and there are teleporters, obstructions and diversions to make it more difficult. There are also traps and for instance ice that forces Scarab to move in a single direction. When the stones are aligned, pressing fire matches them and they disappear. The game can be played in a Logic or in an Arcade mode. Logic mode offers 100 levels with no time limit. Special stones can make the player’s life easier or harder. In Arcade mode the player has to complete a level within a certain amount of time. Special coins can be used to buy extras after each level, such as ability to fly for 30 seconds, more time, extra lives and others. Levels are generated at random. The Arcade mode has a high score table. Demo mode shows the usage of all the different stones found in the game. This is a sort of non-playable tutorial. The game also provides a level editor.