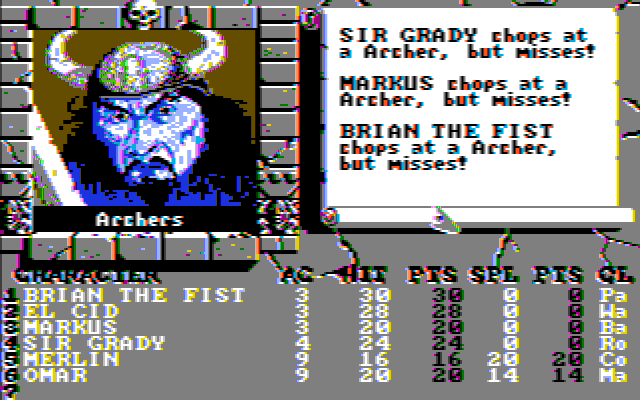 After a group of brave heroes defeated the wizard Mangar the Dark and freed Skara Brae from eternal winter, all seemed well in the world. However, the evil Archmage Lagoth Zanta shows up and splits the Destiny Wand into seven pieces, scattering them all over the land. The Destiny Wand has protected the lands for seven hundred years, and without it the realm will fall into chaos. Thus it falls upon the heroes to reforge it. One of them also has to ascend to the position of Archmage and use the wand to defeat Lagoth Zanta. The Destiny Knight is the second installment in the Bard's Tale series, and a sequel to Tales of the Unknown. Like its predecessor, it is a fantasy role-playing game with first-person exploration of a pseudo-3D world and turn-based battles against randomly appearing enemies. The sequel features six towns as opposed to the predecessor's only one, and a larger overworld area. Dungeons contain more traps and puzzles than before. The player can create a party of up to seven active characters, as well as create additional characters and store them at the Adventurer's Guild in every city. Available races are human, elf, dwarf, hobbit, half-elf, half-orc, and gnome. In addition, some monsters can join the party and be summoned during combat. It is also possible to store money and banks and gamble in the casino, though the latter feature has been removed from the PC version.