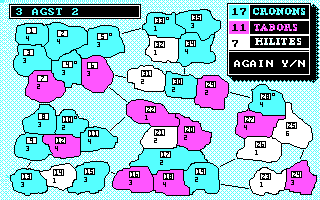 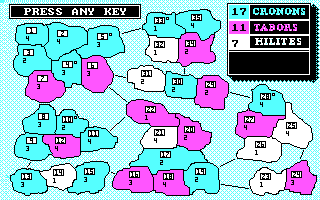 The Banyon Wars is a single player, shareware, Risk variant. In this implementation the player takes on the computer across a chain of islands. There are three races, the Cronons, the Tabors and the Hilites all of whom are battling for control of the Banyon Island chain. The human player always plays as the Cronons who play as light blue. After a few configuration questions the game sets up the game by assigning armies to each of the island territories. Each race then takes turns to plan and action their strategy. In their turn each race distributes new armies, launches attacks and, at the end of an attack phase, they may make some troop movements. One unusual feature of this game is the inclusion of random events that may / may not occur during a game, these include catastrophes like earthquakes, flooding, volcanoes rebellions and good weather which increases the number of armies produced by some territories. Another uncommon feature occurs when the player is eliminated, they are then given the option of conceding the game or letting the computer complete the game The game is entirely keyboard controlled, has optional sound, and a save game function. The computer opponents have seven levels of difficulty