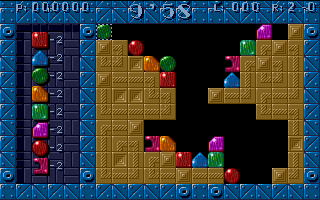 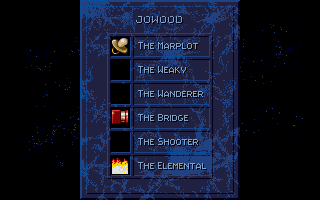 Th!nk Cross is a Puzznic variant. In each of the 150 levels, there are a number of blocks with varying symbols or numbers on them. The player can move each block left or right and when two or more identical blocks are brought together, they vanish. The goal is to eliminate all stones within a time limit. The levels are shown from the side with applied physics, i.e. blocks fall down if pushed from a ledge. There are also various special level elements, e.g. conveyor belts, elevators or weak structure elements which can only bear one block. Passwords are rewarded all five levels and a "help" function can be used twice per level. It brings the level back to point zero without a game over, which is useful when the player navigated into an unwinnable situation. After earning a certain amount of points, the player receives a bomb which can be used to kill off a block of choice.