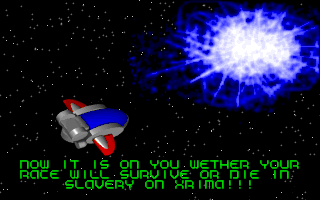 Terroid is a single person, top down, sideways scrolling, shareware, space shooter. The game plays much like R-Type and S.W.I.V. which is as the makers intended, with the player facing wave after wave of alien craft while flying over missile firing ground installations and collecting power-ups. It can be played via a joystick or the keyboard and has sound effects and music. The story behind the game is the generic tale of a lone starfighter returning from patrol to find their home planet destroyed and that the population have been teleported to the alien homeworld as slaves. Only you, that lone pilot, can free them. The full game has nine levels plus two 3D bonus levels, one comes after level three and the other after level six, in which the player has to fly their ship through a series of silver rings while avoiding space mines. The objective is simply to achieve a high score, there are three levels of difficulty Beginner, Easy and Normal with the player scoring more points on the harder settings. These games have fixed levels which contain minefields, barriers and traps. There is also a Training game mode which plays an endless game with "an intelligent level generator' which creates attack waves to fight against, these levels do not have the traps and challenges of the standard games Terroid has no save game option but, unusually, if the player has lost their three lives and has a score in excess of 50,000 they are offered the option of buying three extra lives in exchange for points.