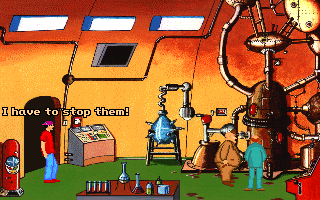 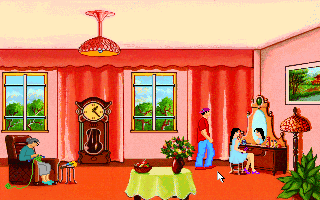 You take the role of Mark Hopper, an ordinary teenager who gets hired by the RGB intelligence (he was selected by a fortune teller) to solve the mystery of gold disappearing from the Mega Bank. But first you're sent to the RGB training camp where you'll have to pass the three trials! Teenagent is a humorous point-and-click adventure, originally available as shareware, but the DOS version was later re-released as freeware. You control Mark Hopper with a mouse - click on where you want him to go, left-click on objects and people to look at them, and right-click on them to interact with them. By moving the cursor to the top of the screen, you bring up your inventory. (Note: the game isn't connected in any way to the 1991 movie Teen Agent.)