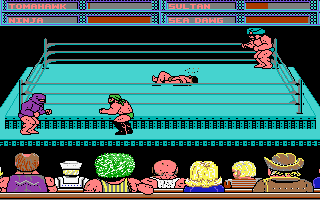 Take Down is a tag-team wrestling game in which one or two players assemble their two-man powerhouse from a line-up of 8 wrestlers: Mr. Cool, Sgt. Slam, Tomahawk, Iron Head, Viking, Sea Dawg, Sultan, Ninja. Each wrestler has a short audio intro when selected. Selecting two of them, players start the fight. The gameplay is flown on a static ring without a referee. Both of the tag partners are starting the action on the same side of the ring. Every wrestler has a few standard moves, including a punch, tag out, jump from the turnbuckle and flying body press off the ropes. In addition, each has a set of four signature moves (action plus direction), ranging from a basic hip-toss to a devastating airplane spin. Once player gets the other guy in a bad way, he leaps on top to try to collect the pinfall. The winning squad is treated to a little victory dance in the ring, specially embossed belts, and a victory in the game's record books. The losers are similarly given a tally in the loss column, however this doesn't affect their abilities.