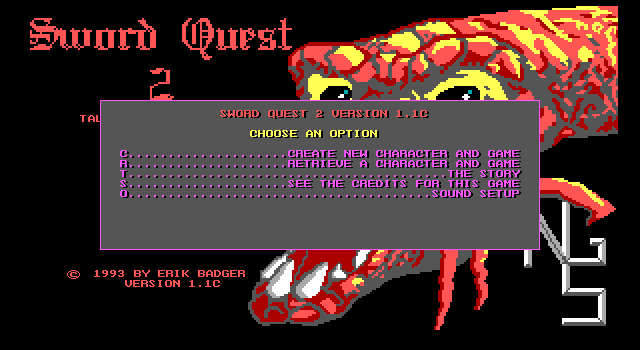 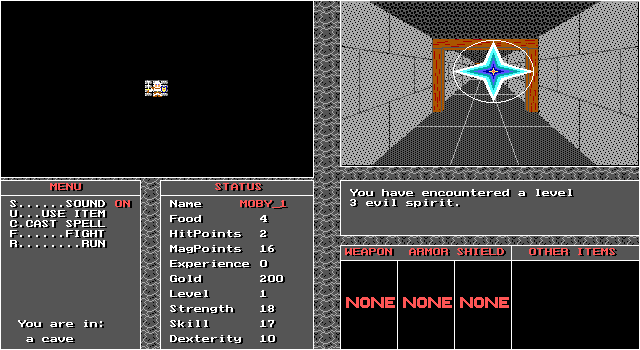 Sword Quest 2: Tale of the Talisman is a single-player, keyboard controlled, fantasy role-playing game and is the sequel to Sword Quest 1: The Search. The player's role is still that of court jester to the King of Ferd, however after the adventures of the first game you've been promoted to knight. All is well, all is good until you are summoned to another world by 'The Wizards of Zrofdomel'. It seems that a baddie known as 'The Dragon Lord' has invaded Golbe - their world, imprisoned their army and unleashed a horde of nasty creatures upon the land, dragons, vampire bats, slimes etc. The wizards are too weak to fight so they've summoned you to free their world by killing the Dragon Lord and claiming his talisman, all of which you must do before they will send you home. The wizards send you forth with food and money but crucially you are without armour and weapons so, once again, it's best avoid and fighting until better equipped and at least you have money to buy them with if you can make it to a town unscathed. The game starts by creating a character, the game will assign skill points to the three categories of strength, skill and dexterity and then gives the player thirty points to assign to these skills as they wish. All gameplay takes place on a single screen. In the upper left is a window showing the character in the landscape, below this are two smaller windows one shows the basic keyboard commands while the other shows the character statistics. In the upper right is the fight window, this shows the current enemy and when not fighting it shows the game's title. Below this, mid-right, is the dialogue box and below that are small windows which show the current weapon, armour, shield and 'other items' being carried As with the previous game this means is that the player moves their character around the landscape in one window but has to watch the fight window to see if they've run into anything nasty and the dialogue window to see how many hit points they take from an opponent (or lose to said adversary). There are some sound effects in the game and when the player dies they are revived by the wizards right back at the start of the game but some or all of their items are lost in the process.