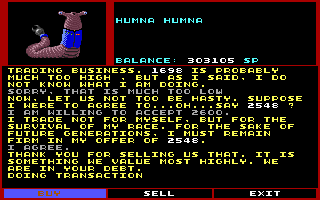 Following the events of the first Starflight, the galaxy is at relative peace. The balance of power is disrupted when the Spemin, usually a minor nuisance, suddenly gain technological superiority and begin a campaign of expansionism. Through investigation, Interstel determines that the Spemin technology is not their own and that they have obtained it from somewhere on the other side of a flux (wormhole). Interstel commissions a force to visit this area, called the Cloud Nebula, and find a way to nullify the Spemin technology. Starflight 2 is a space exploration game that contains much of the interface from its predecessor. This includes crew management, ship improvement, resource collection, planet landings, alien diplomacy and exploration of a new galaxy. Much of the gameplay takes place via a standard interface that allows access to ship stations. Landing on a planet however will shift to an overhead view and the player manually controls his rover while searching for objects of interest. New to Starflight 2 is trading, alien races will now buy and sell unique items at different prices, it is no longer necessary to return to the Interstel starport to sell resources. As mentioned, the galaxy itself and the alien races that inhabit it are also new. New technologies exist for the player such as Blasto Pods (torpedoes); a devastating weapon, and Jump Pods; which will transport anywhere on the starmap.