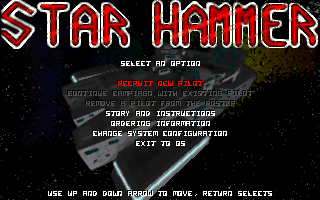 You could think of Star Hammer as Wing Commander in 2D. You are the pilot of a combat space ship which has to destroy enemies or protect friendly shuttles. The game features 40 linear missions with the main goal to defeat an enemy alien race. In a topdown perspective you steer the ship through the space and shoot at enemies. Your ship has different weapons and a shield which decreases when enemies hit your ship. On the upper left corner is a mini map which shows friend and foe. Several in vector graphics animated cutscenes play during the campaign.