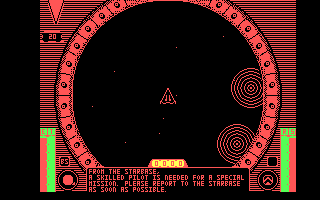 The ultimate goal in Empire! is to build a great galactic empire protected by a huge frontier shield. Before this can be achieved however, players have to complete various missions, trade with starbases and fight off invading aliens. The ship is controlled from a top-down perspective, with four gauges indicating its energy level, temperature, radiation level and shield status. When the radiation level or temperature reach maximum, the ship is destroyed. The ship heats up when it's near a sun or firing weapons. The radiation level rises when radioactive pods are carried. When the ship is running out of fuel, it can be refueled by collecting ore from planets. Two direction finders at the bottom of the screen point towards the next starbase, mission objective or manually chosen target. At starbases, players can accept missions and trade minerals, ore or people. These three goods can be found on planets (in form of pods). In order to land on a planet, players must enter a warp hole. Once on the planet's surface, the game switches to first-person perspective and the player has to dodge or destroy rockets fired at the ship and follow the direction finders towards pods or the "exit". Starbases need to be supplied with materials to be able to produce "performance pods" and equipment for the ship. In order to reach other star systems, players have to fly through asteroid belts. Although some systems can only be reached with a special hyperspace pod. Many star systems are overrun by aliens and can only be reclaimed when all aliens are wiped out. There are also systems that are infected with the plaque and players must take care not to spread it to other systems. As the game progresses, more aliens, better equipment and new starbases appear. When all systems have been visited, players can buy starbases. When all systems are owned by the player, the game can be finished by constructing the frontier shield.