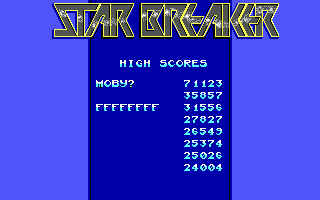 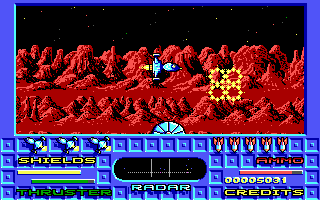 This futuristic shooter combines two distinct styles of gameplay into a multi-level romp through space. The colony planets of New Chicago have been overrun by gangs of Rrampon invaders, and a state-of-the-art space cruiser has been sent in to purge the infestation. It's up to the Star Breaker, and its android pilot, to destroy the enemy's airborne forces and dispatch the interlopers underground. The main section of each level takes place above the surface of one of the lifeless planets, and plays like a Defender -style shoot-'em-up. The Star Breaker can fly in four directions as it tracks down the Rrampon forces on its radar display - from mines and suicide droids to the dreaded Harvester command ships. The docking bays on the surface provide access to the underground bases. Here, control is transferred to the Light Trooper android, which heads down to the tunnels to hunt down the overlords and their Space Clams. The android can either fly through the rooms using its thrusters, or walk on the ground; computer terminals provide status reports, and can resupply the player with ammo, shields, thruster power and bombs. When the base is cleared, a self-destruct code can be activated, giving the player a few seconds to evacuate. The level is completed when every base has been destroyed, and all the command vessels have been shot down from the skies.