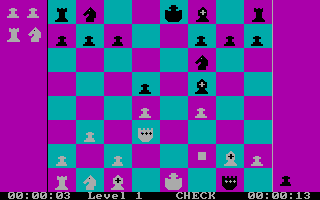 SPOC (Selective Pruning Optimization Chess) lets you challenge your computer to the 'game of kings'. The game screen displays a top-down graphical representation of the board, with dual clocks to time each move; the player gets the choice of white or black, and can optionally output moves to the printer. Standard rules apply, including castling and queening. There are nine skill levels for the computer opponent, which decide how much time it can take per move (level 6 has special meaning as a 'tournament' level: the clocks count down two hours for each player to make a 40-move sequence). Version 2.0 improves the graphics and UI somewhat, adds en passant captures, counts moves on-screen, and introduces new features ("undo" functionality, forcing immediate CPU moves, playback of recorded matches) - plus the option to play a human opponent.