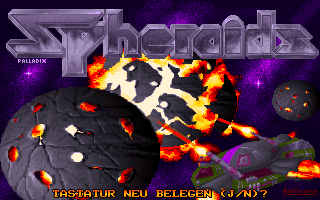 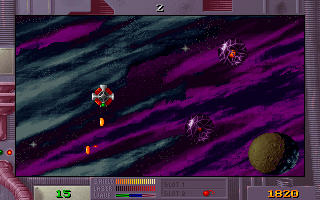 Spheroids is a non-scrolling, top-down shooter with following background story: Robots attack Earth. The robot ships attack in waves and the direction they will enter the screen is shown with an arrow shortly beforehand. The player, of course, also has a space ship which is equipped with a turret which should be used to shoot the robots. The direction of the ship and the turret is changed independently, i.e. the player can move into one direction and shoot in another. Earned money is reinvested between levels for ship upgrades (speed, armor and turret) or powerful but limited special weapons.