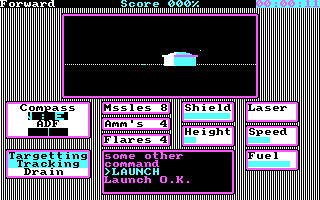 Pete Cooke 's follow-up to the previous space shooter-explorer takes things away from the Tau Ceti setting. Players take the role of a student at an academy for advanced piloting. There they need to solve 20 simulated missions on a wide range of planets. The self-contained missions mean that the game uses the Tau Ceti structure and theme, without the causality of previous decisions having an effect on later choices. This reduces the complexity of management. Although players can customize the ships, including giving them names of your choice, the game comes with supplied ones include a variety that should suit many different circumstances. Whichever vehicle is chosen, players will control it from a 1st person perspective and a series of controls. All ships skim over the surface of the planet and feature weapons. Most missions will involve destroying rogue robots enemies. Players will have to dock with buildings to refuel or move on to a different planet.