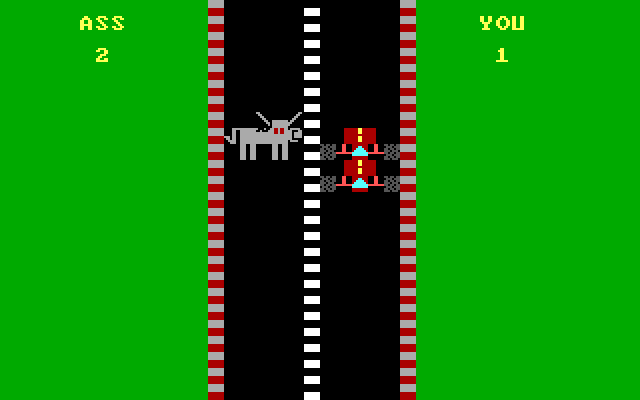 Written as a tribute for the 35th anniversary of the IBM PC (and DOS), this is a tiny reworking of Bill Gates ' only direct personal contribution to video game history - the BASIC demonstration Donkey from the very first versions of PC-DOS/MS-DOS. The game runs entirely off the 512-byte boot sector of a standard diskette (although a DOS version is included as well) and can be played on most descendants of the IBM PC, up until today and all the way back to the original 5150. Just as with Donkey, the player's leisurely drive along a straight stretch of road is interrupted by a pack of stray jackasses. The oddly sturdy beasts will survive any collision (and earn a point from it, too) so it's imperative to switch lanes to avoid them. The reaction time diminishes with each successive donkey; after advancing far enough, it's the driver who scores a point. Unlike the original, the game ends when either side reaches a score of 10.