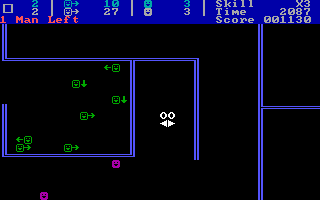 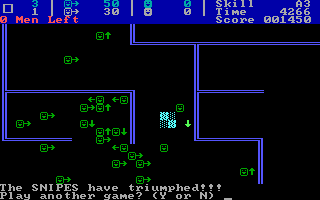 Snipes is an arcade style action game. You are in a large maze along with a number of generators. The generators create the enemy Snipes, and to win the game you need to shoot all of the generators and all of the Snipes they create. The game is played using two sets of four keys, one set to move and one to fire; this allows you to both move and fire in eight different directions, and you aren't limited to firing in the same direction you are facing (similar to the controls in games such as Robotron: 2084). The Snipes are armed as well, and will be firing back at you! If you lose all of your lives, the game ends and the Snipes win. There are numerous skill levels available; in the higher levels the snipes are more numerous, more aggressive, and the maze walls become deadly to touch.