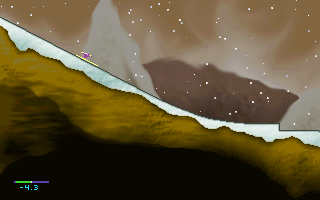 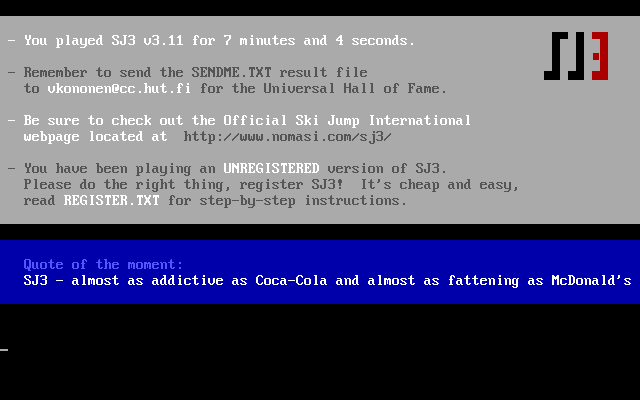 Ski Jump International is a keyboard-controlled ski jumping simulator. Earlier versions of the game are now very obscure, but version 3 is still available for download. The game is available as shareware, but it can also be registered for a rather modest sum, which gives access to some features. The game includes several jumping hills, loosely based on real ones - mostly ones used in real World Championships and World Cup competitions. Their K-points (distances used as basis for calculating jump distance into points) are based on reality, though now largely outdated, their appearance is definitely non-realistic. The game also includes hill records that were real at some point and continued being updated for some time, but are now also outdated. It is possible to train on each hill and to play in competition mode. The game features several kinds of competitions: World Cup - quite faithfully based on real World Cup rules (50 jumpers qualifying to the first round, 15 top athletes with automatic qualification, etc.), hosted on all original hills in the game. Injury is also possible and causes the competitor to miss a certain number of individual competitions. Custom World Cup - only on selected hills (both original and player-made ones are possible), with possibility to compete against others on the internet. However, the game doesn't offer direct internet access and jump replays had to be uploaded on the game's website. Four Hills Tournament - the legendary tournament held in Oberstdorf, Garmisch-Partenkirchen, Innsbruck, and Bischofshofen, now included in the World Cup series, but with some different rules. Team Cup - a team competition (each national team consists of four jumpers), only available to registered players. King of the Hill - a special kind of competition, against human or computer jumpers, where the last contestant is excluded after each round until only one is left. Registered users are also able to create their own hills which can use self-made graphics.