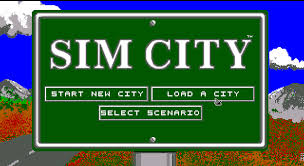 SimCity, also known as Micropolis or SimCity Classic,[1] is a city-building simulation video game developed by Will Wright and released for a number of platforms from 1989 to 1991. SimCity features two-dimensional graphics and an overhead perspective. The objective of the game is to create a city, develop residential and industrial areas, build infrastructure and collect taxes for further development of the city. Importance is put on increasing the standard of living of the population, maintaining a balance between the different sectors, and monitoring the region’s environmental situation to prevent the settlement from declining and going bankrupt.

SimCity was independently developed by Will Wright beginning in 1985, and would not see its first release until 1989.[2][3] Because the game lacked any of the arcade or action elements that dominated the video game market in the 1980s, video game publishers declined to release the title in fear of its commercial failure, until Broderbund eventually agreed to distribute it. Although the game initially sold poorly, positive feedback from the gaming press boosted its sales. After becoming a best-seller, SimCity was released on several other platforms, most notably on the Super NES in 1991, in which its gameplay was significantly improved with Nintendo’s involvement.

SimCity was commercially successful, selling 300,000 units for personal computers and nearly 2 million units for the SNES. The game was recognized as a new phenomenon within the gaming industry, and it broke the widespread belief that computer games were primarily intended for children. SimCity was met with critical appraisal for its innovative and addictive gameplay in spite of the absence of platformer or shooter elements. Reviewers considered the game to be instructive and helpful toward the player’s understanding of the basics of urban planning, politics and economics. SimCity received numerous awards from various news publishers and associations. The success of SimCity marked the beginning of the urban simulation genre of video games, as well as publisher Maxis’s tradition of producing non-linear simulation games, one of which – The Sims – would surpass all its predecessors in popularity and become one of the best-selling franchises in the video game industry. It is considered one of the greatest video games of all time.