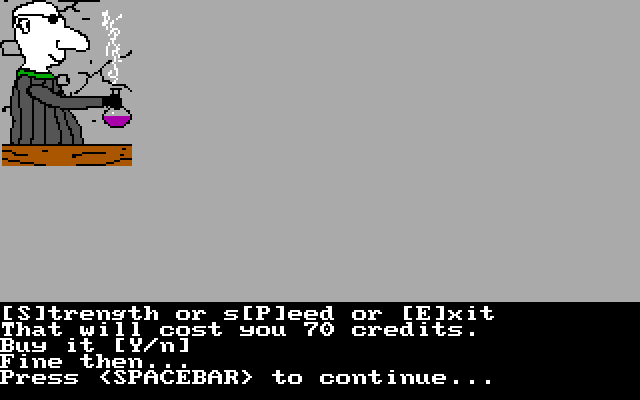 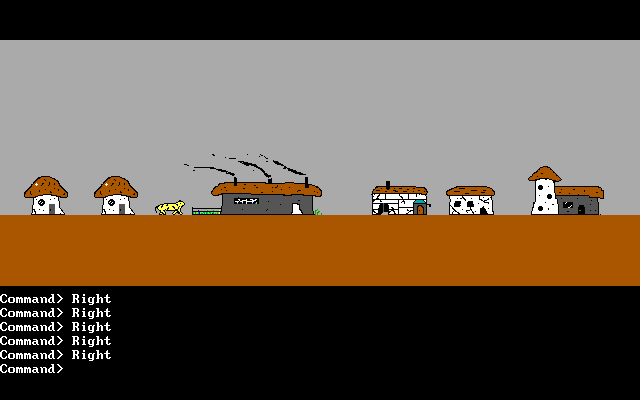 In Shape Shifter you play as a shapeshifter living in a desert land called 'Drelg Artavia' which is being besieged by Creatures of Chaos invading through a rip in space/time. The ultimate goal of the game is for your character (and all inhabitants of the land) to achieve admittance into a castle and ruling council called 'ABSOMAL FXILE', and this requires you to show enlightenment to be accepted. Your knowledge statistics is the key thing here, but the way to the castle also requires valiant fighting and mystic abilities to succeed. The player character can alter itself to three shapes: Tiger, Snake and Mouse. These shapes have different speed and strength abilities, and the shape also affects the probability of random encounters. The environment is a desert savannah landscape, with small villages and lone buildings strewn about, surrounded by water. While moving in the open landscape, you will have random encounters with various animals 'Creatures of Chaos' who attack you, but also with some helpful fairies who give you some health potions. Moving to a village (or lone building) on the desert map, you can enter the village and there see a row of houses, which in turn can be entered and examined. There may be inhabitants in any private house, so you need to talk to a possibly empty room, to know if anyone is there and answers. In other houses there are merchants, healers, mystics or priests that are shown as figures inside the room, and they can be talked to or you can purchase wares from them. In some temples you can pray, but the result may vary, and is not always to your benefit. While using the tiger shape, you are strong and slow, and will often be attacked in random encounters, which might seem bad, but this is a way of gaining credits to pay for the merchants products. The snake is faster, and has fewer encounters, and the mouse is fastest and have almost no encounters; thus cannot gain much credits. Your health points stay the same when shape-shifting, so if wandering the desert at low health, it's best to avoid being attacked until you have healed up. Registering the game will also give you a second game called 'The Sun Demon', also set in the land of 'Drelg Artavia', being turned into a desert after the sun has been misaligned by a demon wanting to turn the lands into a hell of molten lava. Of course you will now be required to save this world.