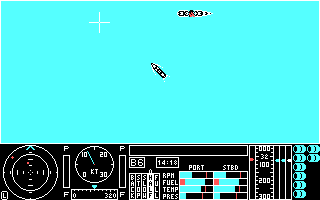 Search and Destroy is a WWII-era naval simulator featuring a series of marine missions, all with the goal of defending groups of friendly ships from enemy sub attacks. Each mission takes the player aboard a Fletcher-class destroyer into a different area, viewed using a zoomable map, where an enemy submarine must be located according to sighting reports received over the radio. The destroyer is armed with a limited supply of depth charges to dispatch the attacker, using the sonar (with its two selectable range settings) and depth indicator to intercept. Enemy subs fight back with torpedoes, and all damage to the destroyer can be monitored and controlled, using pumps, flood controls and automated repair. If the attacker is successfully eliminated, the player's performance is evaluated and s/he may earn a promotion - and possibly a medal (for outstanding achievements). On the other hand, characters may be killed in action, or even demoted for desertion if a mission is aborted early. The destroyers are modeled and named after real historical ships, and the game offers several features such as mission replay (letting you watch through the previous engagement with the enemy sub visible), a Sea Trials (practice) mode, and the Hall of Valor which records the history and statistics for every character created.