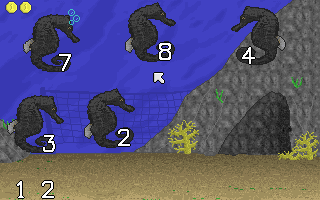 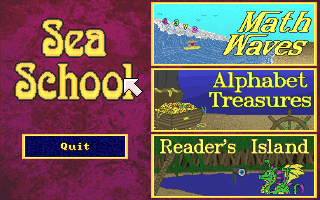 Sea School is a shareware educational title aimed at three to seven year olds. It covers maths, the alphabet and reading in a series of simple mini-games all with a sea theme The game is a trilogy consisting of three 'volumes', each of which focuses on a specific topic and contains a series of five mini games. Volume 1 is the Maths Wave, this was released as shareware, it had the following mini games: Waves - A counting game where items such as fish and shells are washed ashore. The pupil counts them and then selects the correct number from those offered. Sea Horses - A number sequencing game where the pupil selects the number one from a group of sea horses. That is then placed on the sea floor and they must select number two from the next group and so-on up to ten. Penguins - The player is presented with a simple addition sum, the answer will not exceed ten, and they must select the correct answer from among the numbers held by a group of penguins. Ice Fishing - Here player is presented with a simple subtraction sum and they must select the correct answer from a series of fishing holes. Sand Brushing - In the sand are is a set of five numbered outlines. The player selects the correct number from a line at the bottom of the screen and then brushes the outline to reveal the hidden object. Each correct answer wins a coin. At the end of each set of questions the coins tumble into a treasure chest and the player's rank is revealed. All games are played with the mouse, and are animated with both music and sound effects. Volumes Two: Alphabet Treasures and Volume Three: Reader's Island were only available in the full version.