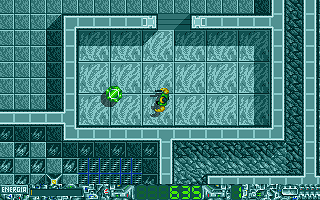 Rooster is a 2D top-down shooter with logic elements visually resembles the game Alien Breed. The player's task is to annihilate terrorists from Mars who have mastered the science base on the moon, where the best Earth scientists conducted research on new types of weapons. Terrorists have taken over the space station defenses robots that treat our commando as a hostile. In addition to the enemies you come across various interactive elements, such as mobile missiles, mines, generators, turbines, scientists. The game consists of four extensive levels.