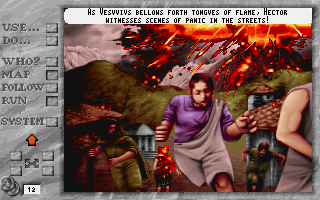 Rome: Pathway to Power is set - as the name implies - in Ancient Rome. You start life as a poor slave in Herculaneum, which, along with Pompeii, was destroyed by the eruption of Mt. Vesuvius. Eventually you travel to Rome and climb the social ladder, becoming a Captain in the army, a Senator and eventually Emperor of Rome. Four of the game's six levels are adventure style romps, while in the other two levels you control an army in an attempt to conquer an enemy of Rome. The game contains many characteristic details to be seen around the levels; from naked people running around the Baths, to buying slaves to fight in the Gladiatorial games. There are instances in which you have the freedom to choose how to deal with various problems.