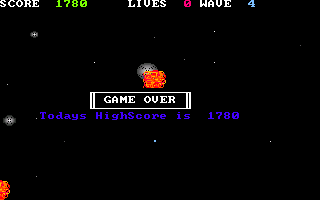 Rocks is an Asteroids clone. Much like in the zap-'em-up hit from the arcades, you find yourself inexplicably trapped in a rectangular region of space that wraps around on itself on all four sides, populated by successive waves of asteroids being hurled in random directions. Your turn and thrust controls allow your ship to cruise around the playfield, equipped with a frontal mounted blaster to dispatch the wandering lumps of space rock. You can also brake to restrain your inertial motion. Blasting apart a large rock causes it to split in two, and the same goes for the resulting fragments, until the smallest chunks are eliminated. Each consecutive wave brings more asteroids into play, and occasionally a suspiciously-square alien craft will drop in to menace you as well.