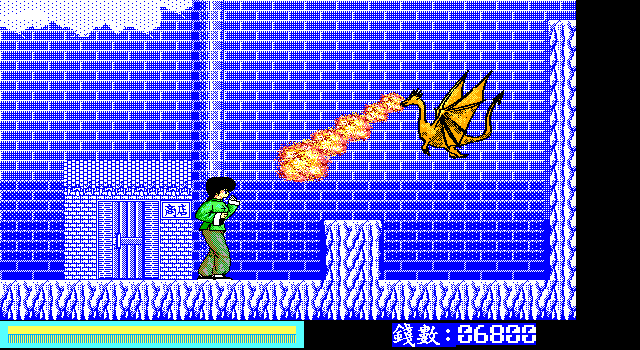 Qi Xiao Quan is a Taiwanese-made action game based on the Japanese manga Ranma ½. The protagonist is a teenager named Ranma who fell into a cursed spring, which causes him to turn into a girl whenever he touches water. There are two modes in the game, which are essentially two different games in one. The "Normal" mode involves exploring a labyrinthine first-person pseudo-3D dungeon, occasionally participating in side-scrolling one-on-one fights, during which Ranma can jump, punch, and kick the opponent. Other events include encountering characters from the manga or game developers, answering trivia questions, or playing rock-paper-scissors with a panda who also happens to be Ranma's father. The "Special" mode is a side-scrolling action game with light platforming elements. In this mode, Ranma traverses linear stages and shoots small fireballs at enemies. He can also charge to perform a more powerful attack. Each stage ends with a boss battle.The player controls Ranma in his male incarnation in both modes.