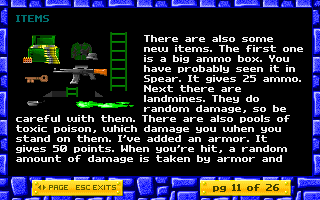 Project: Weltuntergang ("Project: Doomsday") is a standalone modification for the first-person shooter Wolfenstein 3D. The player controls B. J. Blazkowicz from the original game, who needs to infiltrate castle Blutigbeil where secret Nazi chemical weapons are being produced. The gameplay remains similar to the original game. There are some added features, such as armor that protects the player from attacks but wears down quickly, deadly landmines, and some new enemies, such as Panzerfaust-wielding guards and tanks. The player can use two chainguns at once; he can also find an entirely new type of rifle, which uses special ammo. It's also possible to find holes and ladders which transport the player to other rooms. On some levels the player rides a motorbike, which is hard to control, but can be used to kill enemies by running into them.