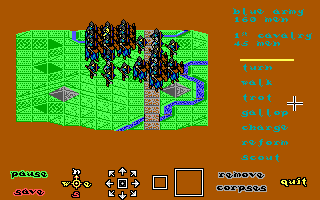 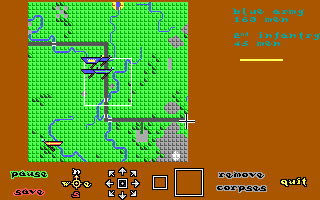 In this early medieval real-time strategy war-game, two feuding princes on a small island have it out for each other. The king is dead and his successor must be determined through elimination, 'The Code of Steel'. At the start of the game you decide upon the size of your army and the island on which the conflict takes place and the objective is to kill the other prince before his army gets yours. Once the setup is over and done with, the armies are put down on the island and the conflict begins. The units can be commandeered at three different levels of granularity, from the prince's banner down to the company, showing each individual soldier. Commands are issued by selecting the company or commander and issuing one of a set number of options to the unit. Once the armies meet they will battle it out until one of the princes is killed, terrain and conditions will affect the outcome of any conflict. Two player games can be played via a null modem cable on two different computers.