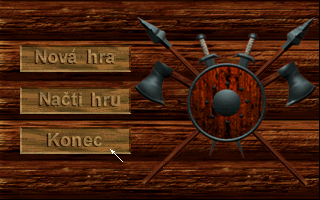 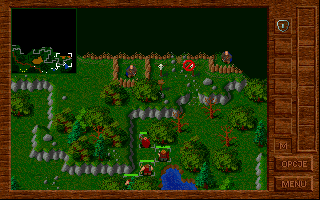 The year is 699. Young Slav prince Mirko is returning from a successful war raid only to find his home settlement burned to the ground and all kinsfolk killed. Swearing a revenge on treacherous neighbours, Mirko gathers his faithful warriors, leading them to conquer all surrounding territories. Polanie is a real-time strategy game similar to Warcraft. There's only one non-linear campaign (25 missions) and the enemies use the same unit types. The only resource in the game is milk: everything - from buildings through defensive walls, bridges to new units - is built using a certain amount of it. The milk is produced by cows, which graze the grassland around your village. When they eat enough, the cows will return to their barns and the milk will be added to your resources. Woodcutters are needed to complete buildings ("bought" with milk), they double as axemen in combat. The early medieval setting is spiced up with a touch of magic: your men (enemies too!) may heal themselves at sacred places scattered around the map, priests and priestesses may call fire from the sky. Creatures of magic or nature may provide help or nuisance. Large warrior teams can be selected and controlled as a group. The CD-ROM re-release added 3 new units, 5 short campaigns (total 27 new missions), 3D animations and music on audio tracks. German edition, titled Victory and based on floppy disk release, goes beyond the obvious translation/dubbing changes and introduces a plot twist: the campaign map has changed from Polish to German territory in the background, so we no longer unite Slavic tribes (intro animation is absent as well). Czech edition is based on updated Polish CD-ROM re-release.