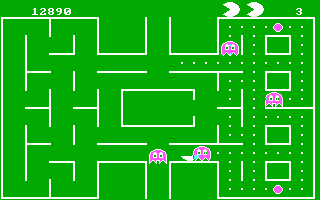 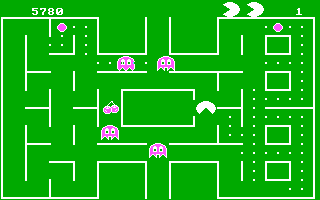 As the thinly-veiled title suggests, Packman is an overt Pac-Man clone, written in compiled BASIC. The maze is rotated 90 degrees from the original layout, but the idea remains the same: clear each level by munching on dots, collect the occasional prize item for bonus points, and dodge the four ghosts that roam the corridors. The power capsules in the corners will temporarily slow down your enemies, and allow you to catch them for increasing point awards; when the effect wears off, they will flash and revert to their normal, mean state. Each level kicks the difficulty up a notch. You start with three 'packmen', and gain an extra one for every 10,000 points.