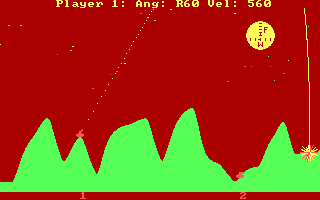 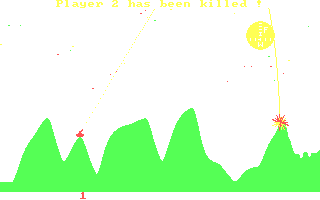 As artillery games are wont to do, Night Fire sticks each player into the stuffy interior of a tank, placed somewhere on a randomly generated terrain, and pits the participants (2 to 8 of them) against one another in a merry free-for-all of ballistic abandon. The objective? stay alive, and prevent your opponents from doing the same by feeding them carefully-measured portions of flaming death. Each player in turn can either move or shoot - moving is useful for improving tactical positions (and avoiding an untimely demise when enemy shells start getting too close). For shooting, the barrel angle and shell velocity can be modified as needed. Presiding over the battle is the full moon, which provides more than ambience: it helpfully displays on its disc two gauges, indicating air friction and the wind's speed and direction, which also have to be taken into account.