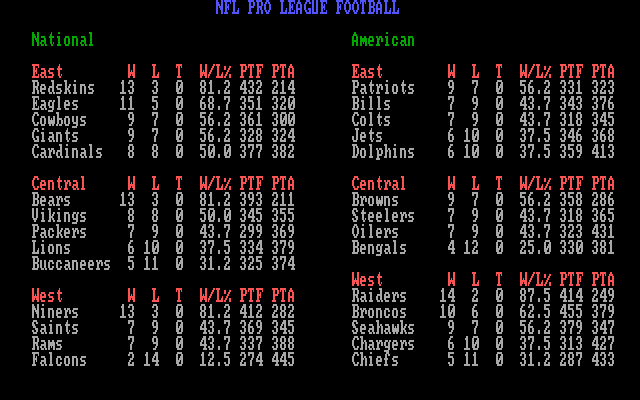 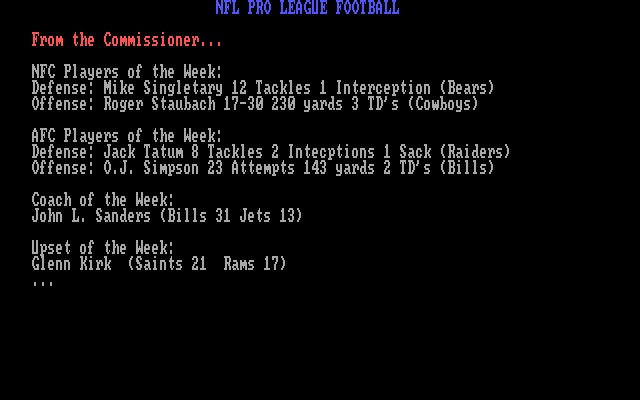 NFL Pro League Football is a football simulation which allows the player to manage a football team. In the league play game variation, the player will need to create a game plan (or optionally allow the computer to create one). A wide variety of statistics can be set for the teams, including the percentage of times the team should run the ball in various scenarios, pass defense strategies, pass coverage, select players for carrying the ball, play types, and many other options (each team has over 100 stats that can be set). The player can also set various weather conditions, and even call the coin toss. Based on all of the parameters that have been selected, the computer will simulate a game. Optionally, the player can view the game play by play with an overhead view where the computer uses X's and O's to represent the players on the field and provides a commentary. After the game, a stats keeper is available which allows the player to analyze the game to find weaknesses and strengths that can be tuned to improved the team for the next game. Various records and season stats are kept here as well. The player also has the ability to scout for new players and update teams. Also included is the NFL Headup Football game variation. In this game two players compete (or one player competes against the computer) in a single game. Each player acts as the coach and needs to call the game play by play. After each play is selected, the computer will simulate the outcome. Two-player games can be played on the same computer or via modem. The game allows the player to print out game plans as well as all of the available statistics. NFL Pro League Football is an officially licensed game, and features 3 years of data on real players and teams.