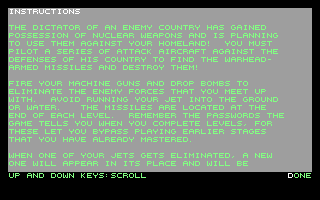 Navjet is a side-scrolling arcade game where you fly an attack aircraft to defend against enemy aircraft and naval force from a neighboring country. You start out in the center of the screen with eight lives, and your jet aircraft in the air over the sea, with the enemy coming from the right side of the screen. Movement up/down/left/right is allowed, so you can fly back to catch enemies who passed you, though you cannot move left of your spawn point. Waves of enemy aircraft start from carriers at your right, and move to the left and turn at your starting point, to come back from behind you. You can shoot a gun and drop bombs from your aircraft, and you never run out of ammunition. When you shoot some objects, you get stars hanging in the air, which are extra lives if you catch them by flying through them. If you shoot the stars, you lose them, and get no extra lives. If you reach the end of the map, you will find the enemies nuclear missiles, which you need to destroy to get to the next level. You also gain a password to each level, so you won't have to restart from the beginning if you restart the game.