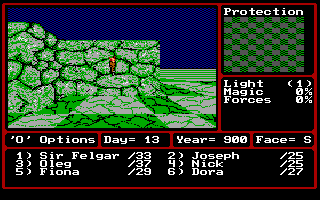 The space traveler and rogue guardian Sheltem has left the world VARN, where he was pursued by the relentless Corak the Mysterious and a party of local adventurers helping him. The Gates to Another World eventually takes all of them to another world, known as CRON. There, a great turmoil is caused by Sheltem's actions, and the heroes must stop his madness, preventing him from casting the planet into its own sun. Gates to Another World is the second installment in the Might and Magic series, and a sequel to Secret of the Inner Sanctum. Core gameplay is similar to predecessor, with the player creating a party of six characters and exploring vast first-person 3D environments, while fighting enemies in turn-based combat and leveling up. Unlike the first game, enemy encounters occur at set points rather than spawning randomly, though enemy type selection is still random. Like in the previous game, character classes rely each on a particular attribute to be effective. Knight, Paladin, Archer, Cleric, Sorcerer and Robber return, with the addition of two new classes, Ninja and Barbarian. Race selection features humans, elves, dwarves, gnomes, and half-orcs. There are several locations and items that are restricted to certain genders, alignments, or races. A new feature is the possibility to hire two non-player characters to travel with the party and participate in battles. A new skill system is introduced as well, allowing characters to learn such abilities as mountaineering (necessary to traverse mountains), linguist (for reading certain messages), cartographer (for creating an auto-map), and others. Compared to the first game, the sequel is more quest-oriented, with various characters in towns giving quests to the party, as opposed to purely exploration-based traveling in the predecessor. Time also plays a large role in this game, with some instances requiring the party to travel to different time periods. Characters also age as the game goes on; If the player waits too long, the characters' statistics will change to reflect their aging, and they will eventually die.