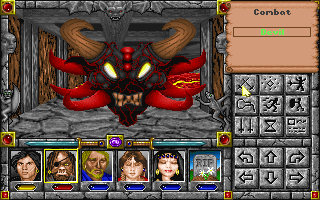 The evasive guardian Sheltem has once again escaped from relentless Corak and the six heroes of Terra who were helping him. The brave adventurers tried to pursue him on his journey through space, but were unable to reach the destination. Meanwhile, the distant world of Xeen is experiencing new troubles. A mysterious villain known as Lord Xeen has imprisoned Crodo, the local oversees, and is plotting to execute control over the land. A band of local adventurers becomes involved in the conflict and get to the bottom of the mystery. Clouds of Xeen is the fourth installment in the Might and Magic series, and a follow-up to Isles of Terra. It utilizes the same graphics and interface as its predecessor, and is generally very similar to it in structure and gameplay. Among new features is the possibility to keep notes recording quests and important locations in the game, a separate inventory section for quest items, and two difficulty levels. All over the game's world there are pyramids which work as teleporters as soon as part five of the series, Darkside of Xeen is installed. The two games can be played simultaneously, merging into World of Xeen, which includes multiple cross-over quests in both installments.