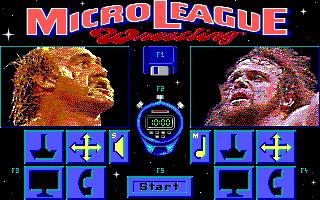 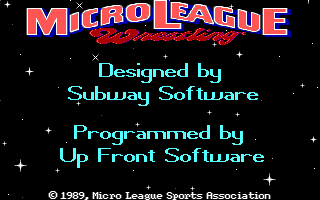 MicroLeague Wrestling is a wrestling game, the very first one licensed by the World Wrestling Federation. The game can be played by one or two players and comes with two possible match-ups, each with a separate match disk. There is Hulk Hogan versus "Macho Man" Randy Savage (all platforms) and Hulk Hogan versus "Mr. Wonderful" Paul Orndorff (Atari ST/C64). For DOS and Amiga the second match is Hogan vs. Dibiase. A bout can last 10, 20 or 60 minutes. Game presentation before, during, and after fights is modeled after WWF TV shows and features digitized stills of actual WWF personalities, including wrestlers, managers, interviewers, commentators and announcers. Digitized images illustrate on-camera interviews, the wrestlers' entrances (complete with renditions of their themes), ringside commentary, and the reactions of the crowd. During a fight, the game follows an unusual approach: Instead of controlling a wrestler directly, players select a move to perform from a menu. The computer decides if it was a success or not and the result is shown via a digitized picture.