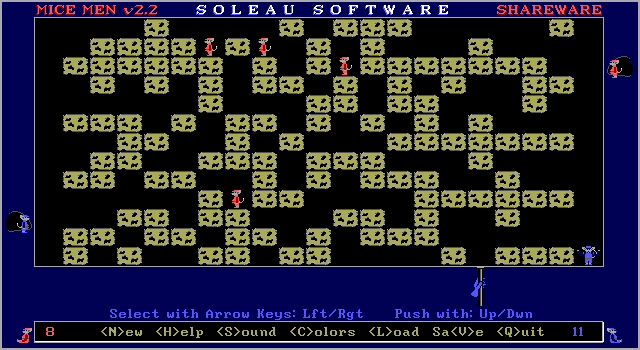 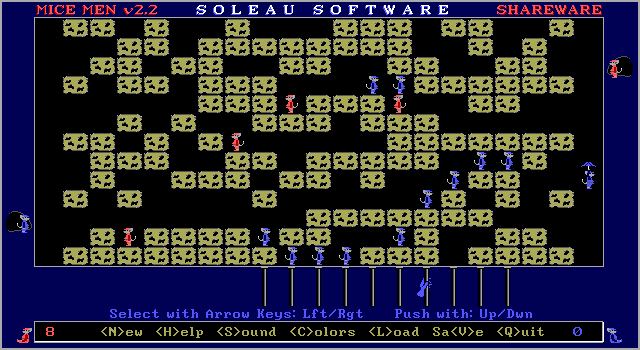 In Mice Men, two players compete in order to see which can be the first to get all of their 12 mice to the other side of the 19 by 13 board of cheese blocks. The board is randomized at the start of a game, but the blue mice are always placed in the first nine columns from the left and the red mice in the first nine columns from the right. The player which gets the first move is also decided randomly. Gameplay consists of each player taking turns moving one column up or down by one unit. The columns wrap around, so moving one down will place what used to be at the bottom at the top, and moving one up will do the reverse. After a move, all the player's mice that no longer have their path blocked will move forward as far as they can, then any of the opponent's mice that can now also move will do so as well. Players can only move columns on which they have at least one mouse. In addition, a player will be unable to move a column even if they have at least one mouse on it if the opponent had just moved that same column or if, in their previous turn, they had moved it for the sixth time in a row. These limits do not apply if the player has all remaining mice on the same column. In case each player has only one mouse remaining, a turn limit applies, the game ending no more than eight turns later even if neither managed to get their sole remaining mouse to the other side of the board. In this situation, the player whose mouse is further along will be declared the winner. If both mice are equally close to their goal at that moment, the game is considered a draw. In the shareware version, the game can only be played against the computer, which will always play with the red mice. In the registered version, two human players can also play against each other.