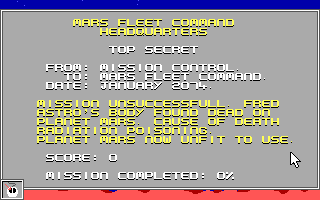 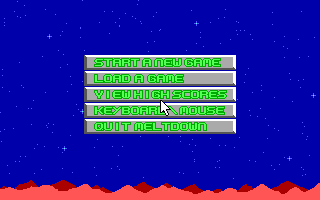 Meltdown is a single-player adventure game. Sometime in the future mankind sets up a base on Mars where this adventure is based. There has been an accident with the nuclear reactor that powers the base. If the reactor explodes it will poison the planet and make it uninhabitable. The player takes the role of Fred Astro, a specialist in nuclear disasters, and it is your task to prevent this and you only have two hours in which to do it! Radiation levels are high and in some places they are fatal. Luckily, somewhere on the base is a prototype radiation proof droid, Beta 23, who you can control. The game is controlled either via the keyboard or the mouse, it has three hundred different locations so the documentation recommends making a map as the game is explored. The player can swap characters to control either Fred Astro or Beta 23 but both have limitations, Fred cannot tolerate radiation levels above three hundred, Beta 23 needs battery power and cannot carry anything. There is a save/load feature and a high score table.