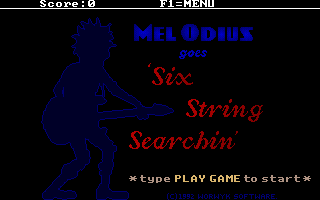 Mel Odius goes Six String Searchin' is a single player, shareware, graphical adventure game. This is an old-school game where the player types in their commands, Look, Get, Talk etc and the game's parser attempts to make sense of it. The game's start screen gives the seven most common commands and a couple of shortcuts but invites the player to try others which is quite common for this kind of game. The story behind this game is that the main character, Mel Odius, has had his famous candy-apple red, custom, Rocky Roads Signature Flying V guitar stolen on the day before he gets to play before some record executives. The object of the game is to find the guitar so that Mel can become a 'rock god'. Mel can be moved around the game via the arrow keys and he can talk to people and enter buildings. The game uses a points system to chart the player's progress, the completed game scores 500 points.