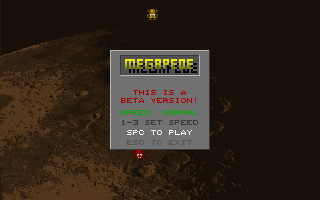 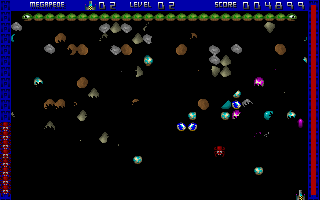 In this clone of Centipede , the player controls a spaceship, which can move freely in the bottom third of the screen, and shoots upward to destroy the oncoming snake. The snake is made up of many segments, and when a section is separated from the rest of the body, its foremost segment becomes a head, forming a new snake. Scattered around the playfield are mushrooms and rocks, which can be destroyed by the player's shots. When the snake encounters one of these obstacles, it descends a row and reverses direction. Destroying a segment of the snake creates a mushroom, filling the playfield and causing the snake to descend more quickly. When the snake reaches the bottom of the screen, it gains armor, causing each segment to take two shots to kill, instead of one, and begins moving upward. Destroying a segment of the snake causes a gauge on the screen to climb. Once the gauge is filled, the player may use a single energized shot, which destroys every snake segment within range of the player. Also on the playfield is a spider, which descends toward the player, though it is slowed by obstacles. Killing the spider repeatedly will award the player an extra life, but the spider's speed increases each time it is killed. Its speed resets after the player is killed, or when a new level begins. Bonus levels appear after every third round, during which the player is assaulted by just the spider and bees, which descend toward the player more quickly, and are not slowed by obstacles. Like the spider, the bees move more quickly as they are killed. After the tenth level, bees begin to appear on the regular levels, in addition to the spider.