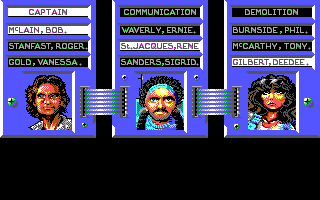 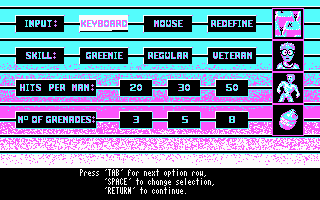 In Mayday Squad, the Lutonian Embassy has been taken over by the Red Legion terror organisation and the ambassador's daughter has been kidnapped. The player takes the role of a group of three special agents which have to save her within a time limit. The player has to choose between nine soldiers which are divided into three categories: leader (shooting), demolition (grenades) and communication (opening locks and picking up items). The soldiers within the same category also have different advantages and weaknesses. Also chosen before starting the mission is the difficulty level and hit points of the team members. During the game itself, one member is controlled by the player and the others by the AI. However, to perform special actions it is possible to instantly switch between them. This is needed because there are a lot of options how to proceed in the maze-like embassy, e.g. players may choose to open a lock or shoot it open. While a large portion of the game is dedicated to finding the way and searching for clues which hint to the daughter's location, there are also strong action elements: When meeting enemies and controlling the leader, the cursor has to be quickly moved over the opponents to shoot them before they can damage the team. Resources like ammo are limited.