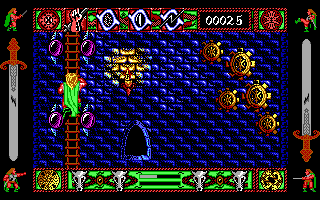 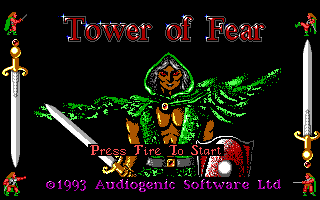 In this out-of-canon adventure of gamebook hero Kai Master Lone Wolf, the player controls the dashing adventurer scaling the interior of warlock Gorazh's sinister magic tower Kazan-Gor -- an inverted pyramid, broadening as it gets higher -- in pursuit of a Lorestone of Nyxator located at the very top. Imprisoned in his flick-screen tower, Gorazh has filled it with monsters and traps, the most insidious of which was a magic mirror, Dhazag-Oud, whose seven shards reflect back superior counterparts of whoever gazes upon them (and which subsequently result in boss battles.) The gameplay largely skips over the choose-your-own-adventure sequences of Lone Wolf's gamebook roots and instead just initially prompts the player to select four of eight Kai skills (eg. Mindshield, Sixth Sense, Healing) to use (with restrictions) over the course of his tower travails. From there, the player controls Lone Wolf's movements, skill use and attack strategies using the keyboard controls.