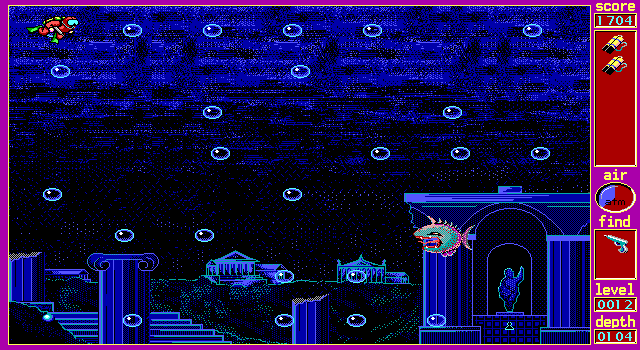 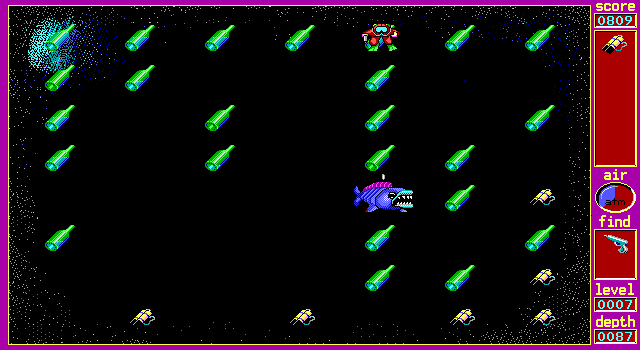 Locman I is an arcade game, which applies an idea used in Perestroika to an underwater adventure. The player is put in the flippers of the scuba diver on his hunt for the treasure of Atlantis after the deployment from a submarine. The goal of the game is to pass through all the underwater labyrinths, caves, wrecked ships and the ruins of ancient Atlantis, and to finally reach the magical island with a castle, where the new perils and adventures await. On each fixed-screen level, the player directly controls the scuba diver, who should move between adjacent vertices of the path towards his goal. These vertices represent various objects, such as air bubbles, starfishes, fishes, shells, crabs, bottles, etc., which gradually grow smaller and eventually disappear, and new items appear to replace them. The player should not be in the place, when no such an item under him. But in case if it is happened, a one of additional air tanks becomes to be exhausted until the air is absent. Certain underwater predators may either chase the scuba diver or wait in the hiding place to attack unexpectedly. Air tanks and precious pearls can be collected on the levels to increase the score. Transition between the levels is possible, when the transition vertex is found on the current level, it is one of vertices adjacent to the screen border. Levels can have several such vertices. Certain important items such as underwater gun, key, or fuel for the boat should be found to advance in the game. Obtaining the gun, the scuba diver can shoot his enemies, but they will quickly re-spawn. Highest scores are stored in top twelve table.