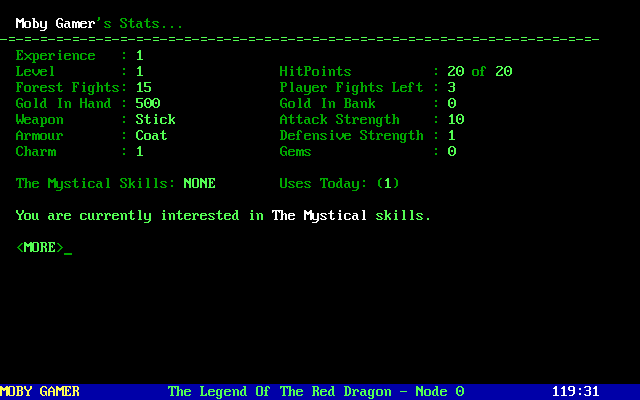 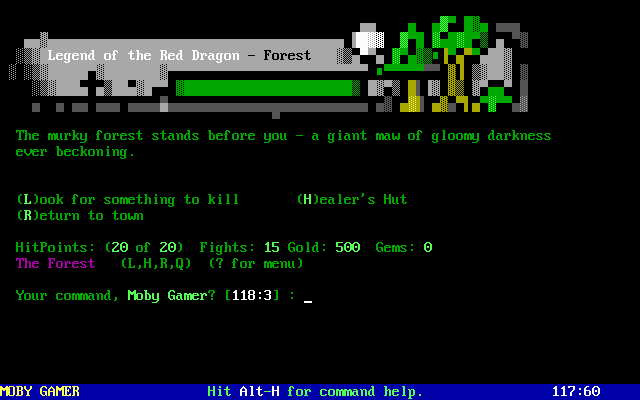 SysOp Seth Able Robinson puts his money where his mouth is and cobbles together a BBS door game for his Amiga board after finding a dearth of other similar offerings for his platform. The framework is textbook RPG -- choose your class, fight monsters to loot money to upgrade equipment and earn experience points to advance in levels until you become sufficiently hardened through battle to vanquish the Red Dragon, scourge of the land. (Really, that's the whole story!) Input is handled through multiple choice selections; output is dished up as colourful text. The above minimalist formula doesn't yet describe the makings of a successful game until you factor in a few additional elements -- the unexpected complexity suggested by unpredictable random events manifesting just when you think you've got the gameplay down pat on auto-pilot; the lackadaisical sense of rude & lewd adolescent humour (whatever, dude) permeating the fantasy world, more Rabelais than Tolkien; and, of course, playing against your friends, not just to compete against their high score, but directly pitting your character in combat against theirs (played by the computer) -- then looting their corpse to add insult to injury and boost your bragging rights, broadcast in the daily bulletin to all active players! Individual SysOp customizations and an explosion of user-made IGMs (in-game modules) expand the play experience enormously from board to board, leaving the player with a vague notion of the framework of what they're going to get next... but keeping the specifics sufficiently jumbled with selections from a deep bag of tricks to keep them on their toes.