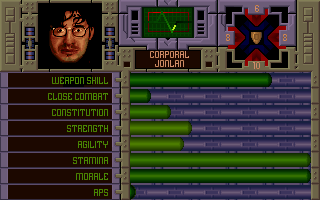 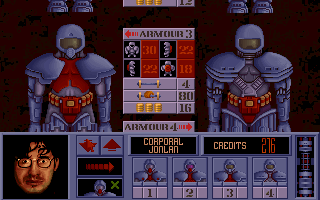 In Laser Squad you control a group of space marine-like soldiers (and the occasional cyborg). Before taking them into battle (viewed from above and progressing in turns), you must buy them weapons and armour with a predetermined amount of credits, taking into account the individual abilities of your squad. Unlike X-COM, the soldiers do not gain experience over time. The game also features a two player hotseat multiplayer option. Initial ZX Spectrum release (and C64 & Amstrad CPC cassette tape releases) had three missions: 1: The Assassins - where you must face down Sterner Regnix and his guards 2: Moonbase Assault - which challenges you to destroy the OmniCorp database 3: Rescue from the Mines - eschew violence in favour of a rescue mission Two more scenarios were available via mail order, later releases by Blade Software and subsequent ports already included them: 4: The Cyber Hordes - defend a rebel station and its seven stabilizer cores from an advancing imperial droid invasion 5: Paradise Valley - following the destruction of the stabilizer cores, escape from the colony with the device containing blueprints for advanced rebel starfighter Two additional missions were released with mail order expansion kit.