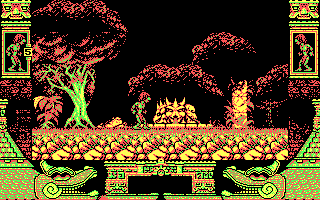 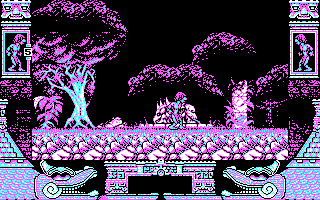 La Espada Sagrada is an action game that consists of three phases, the third being more arcade-oriented than the first two. The protagonist Atahualpa Yupanqui aspires to obtain The Sacred Sword, and problems through the two early stages must be solved in order to find it. Then, in a third phase full of action, the hero takes advantage of that sword to be victorious. The two early stages have no side scrolling, while the third one is an arcade with horizontal scroll and non-stop action and big sprites. To access levels 2 and 3 the player needs a code, which is provided once the previous stage is finished.