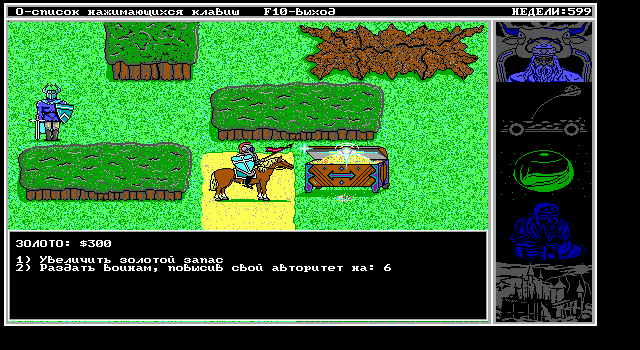 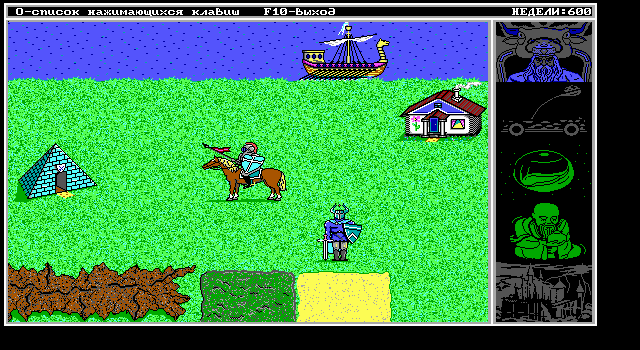 King's Bounty 2 is an unofficial game inspired by New World Computing's King's Bounty that was created in 1992-1993 by Sergei Prokofiev, a programmer based in Kharkov (Ukraine). The game is neither a remake nor a sequel to the original King's Bounty, but rather it expands on the ideas of its inspiration while adding new, unique elements. Custom EGA graphics that had been made for King's Bounty 2 often draw inspiration from Russian/Slavic folk tales. The game isn't shy of its rather clichéd plot. An evil wizard has stolen an important MacGuffin (which isn't even named) from the King, and hid it away in the Dark Castle on a lost continent. The player, taking the role of the King's trusted knight, must find the castle, defeat the wizard and bring the artifact back. Before this can be done however, the continent where the Dark Castle is located must be found. To this end, the player must find five pieces of an ancient map that have been scattered across other continents. Each continent's Lord of the Land might help obtaining a piece of the map, but will request a favour or two in return, and there are other quests to complete on each continent as well. King's Bounty 2 was supposed to be split into two parts, with the first concerning the search for the map pieces, and the second would take place on the lost continent. However, apparently only the first part was completed and released to the public. The game had been a free, non-commercial project from the start, so splitting it into parts was not done as a step towards the shareware model, but rather because of free time considerations. The game retains many familiar elements from King's Bounty. The player roams the land, buys supplies in towns, hires troops, finds treasure chests, and gets contracts to capture castles in order to earn money and reputation to maintain a large, loyal fighting force. Additionally, the player can buy and sell different goods in towns for a profit, and hire workers to help clear the various terrain obstacles (thus, woodcutters can clear forests, carpenters build bridges over water, stonecutters lay passages through mountains). While there are no player classes in the game, spells can be either found in chests and scrolls, or bought in some of the towns to be used at any time. However, to use magic effectively the player must find a benevolent wizard whose training increases the player's spell power. The most common enemies in the game are local feudal lords who are initially neutral to the player but will start chasing and eventually attack when get annoyed by the player's trespassing on their premises. Both the player's and the enemies' armies may consist of a wide variety of creatures, including peasants, mercenaries, soldiers and animals, as well as magical creatures and undead. Each continent has a number of creature dwellings where units can be hired into the player's army. Siege weapons are bought in towns, just like in King's Bounty. Other than direct combat, there are encounters with evil warlocks that can cause trouble for the player, and negative spells in some of the scrolls. A unique feature of King's Bounty 2 is that it uses a random map generator to create a new world each time it is played. There are four difficulty settings, the first three of which are progressively more difficult "training" modes, while the fourth is considered to be the real playing experience. Only the fourth difficulty level was supposed to unlock the lost continent and the final battle with the wizard.