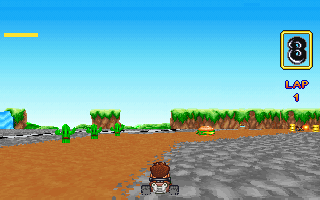 Kart Race is, as the name implies, a racing game featuring small four-wheeled open vehicles known as karts. The competitors are children aged eight to twelve. Players can select any of the eight available characters and either race against the computer AI or compete with each other in a two-player mode. The circuits include various natural environments such as fields, water, icy areas, desert, etc. Each character has a health bar that can be restored by driving over food scattered through the stages. In addition, characters can pick up bowling pins and clubs, which will allow them to throw at enemies bowling balls or fireballs of limited quantities, respectively. In all stages there are also yellow barrels that will incinerate a character upon contact, stopping him or her for a short while.