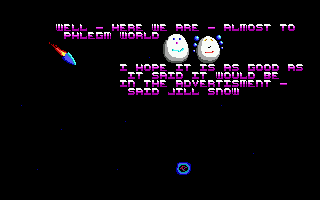 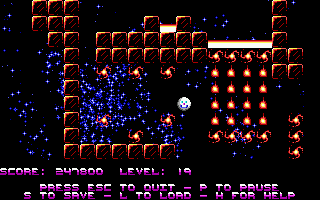 Joe Snow takes his wife Jill on a trip to Phlegm World, hoping to kick back for a bit after his misadventures. Alas, the place proves to be less of a vacation spot, and more of a place where snowball wives get inconsiderately kidnapped by evil wizards, so Joe sets off on the rescue - which, as one might expect, involves a lot of jumping, precise platform navigation and dodging of deadly traps. The fourth game in the series changes things around yet again - like the previous game, we get large 4-way scrolling level maps, though without the "overworld" area, since now it is possible to save at any point within the level. Other new touches include an illustrated introduction, animated objects (Joe included), a bigger-looking and more detailed set of graphics, and selectable game speed.