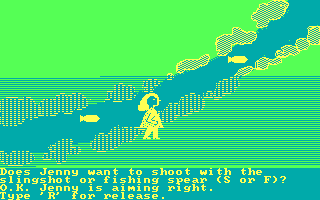 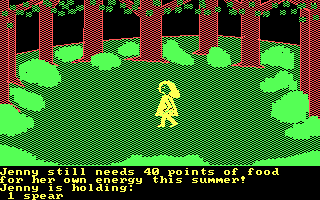 Jenny of the Prairie focuses on a girl who stranded in the prairie after being separated from her wagon train in 1842. As Jenny, the player must prepare for the coming winter by gathering food and having a warm shelter by the time it get's cold. The historical background and the challenge presented are also meant to foster problem solving skills among children, specifically girls. At the beginning, a choice of three different skill levels is offered, and the player is also asked if he wants to build a lean-to in a clearing, or tame a fox and live in a cave. Afterwards, the main quest for survival starts, in which multiple screens can be explored with the character. Jenny can be moved and interact with the environment via keyboard commands. Scores can be displayed for monitoring progress concerning the collection of firewood, food, and a cape for the winter. Certain actions such as picking up things require the input of words. An example of a useful tool is the spear, which may be used for hunting. The player does not necessarily need to kill animals, as plants also can serve as food sources (berries are an example), but there is wildlife such as a rattlesnake which poses danger and may end the game when Jenny encounters it.